When Kacey was in my tummy, the one thing that seemed to excite her was...music. Any kind of music. Even me singing would make her move. After she was born, she developed colic and refulx. It seemed like all she did was scream and puke...but something magical happened when I put music on. She'd settle her tears. She'd bounce up and down in her exersaucer and was full of smiles. She loved being sung to and she'd bounce to the beat. As she grew older, she would sing every song that came on the radio. She had a passion for 60's & 70-'s music (yep! she's an old soul!) but she'd beg me to buy her oldies music and she'd dance around her room singing it word for word...almost as if she'd known the words all along. It was about 2nd grade when she started to mention playing an instrument. We didn't have the extra money to pay for lessons but we continued to feed her music passion with CDs and iTunes. After she was diagnosed, her passion for music seemed to grow. Anytime her sugar was high, she'd grab some water and go lay down in her room with her radio on or she'd crash on the couch with the TV on the oldies music channel. The music calmed her as much as it excited her! By the end of 3rd grade, she was talking to her music teacher about band. He explained to her that they wouldn't be playing any instruments until 5th grade and then it would only be the recorder. She was bummed but continued on her musical path. All of 4th grade was spent counting days til 5th grade when she finally got to play. When 5th grade arrived and she got her recorder in hand, she was thrilled!

But that wasn't enough...she wanted MORE! She continued to count down til the end of 5th grade because she knew once she started Middle School then she would be able to take band. She'd been saying since 3rd grade that she wanted to play the Saxaphone. I kept reminding her that she needed to keep an open mind because she'd get a chance to try all the instruments.

Open House for Middle School arrived and she was thrilled to meet her band teachers. The moment she was waiting for had finally arrived. (And I secretly hoped and prayed that she wouldn't get her bubble bursted and find out it wasn't something she really wanted to do...Boy was I wrong!) The first 2 weeks of school were spent blowing each instrument. She learned that just because you WANT to play an instrument, doesn't mean you CAN. There are certain ways you have to hold your lips and tongue to make sounds and if you have an overbite, crossbite, underbite, braces, ect, it all affects the way you play. She still had in her heart that she was playing the saxaphone. As the first week passed, she found that she wasn't getting any sound out of some of the instruments and other days she would get sound but she said it sounded like "someone farting". LOL! So as the week wore one, she was becoming a little discouraged. She has a cross bite and she hasn't gotten braces yet to fix it so that meant she was somewhat limited. I began to pray...Please Lord just let her be able to play something! The middle of week two came and she was really upset. Several kids had dropped band already because they couldn't get the sound out of the instruments or they found they didn't like it. Then....Thursday of week 2....the time came for her to play the saxaphone. She'd waited so patiently and she said she was so nervous to blow because she was scared no sound would come out. And then......*blow*.....she said she almost cried because "the prettiest sound she ever heard came out of that saxaphone" ....SHE DID IT! The ONLY instrument she could get sound from was the one she'd longed to play. Her teacher stopped what she was doing...looked over at Kacey...and said "Wow! That was the best I've heard all day!" Right then and there, her confidence went through the roof. That was it! She didn't even want to try the drums...haha!

So we signed up...and she got her saxaphone. What happened next was beyond what I could have ever imagined! She brought it home and started to play. I mean...like REALLY play. She was making the prettiest sound.


As the days went on, she learned the notes, she learned how to read music and she was putting it all together. She was so excited because she could look at any sheet music and she understood it. Thats something I've always dreamed to be able to do and she was actually doing it! She practiced....every single night... some days 15 minutes and other days for over an hour! And some days I had to MAKE her put it away. You wouldn't think that sitting in a chair playing a saxaphone for an hour would affect your blood sugar, right? Well it seems that it DOES! Kacey won't just sit in a chair and play...she wants to MARCH! She stomps her feet to the music as she plays. It's so fun to watch because I know that it won't be long and she will be out on that football field with our high school marching band.

Yesterday she came home heartbroken though. She found out there were tryouts for the middle school marching band. She asked if she could try out and she was told it was only for Advanced Band members. She's in Beginning Band but her teacher told her if she keeps moving along like she is then she is going to move her to the Advanced Band class because she's doing so well and she doesn't want to hold her back with those that really aren't practicing. So now she's stuck in limbo :(  She hasn't moved yet so she can't be in marching band but shes sooooooo ready for it! I had to sit her down and remind her about how long she waited to get to where she was now. It's been 4 years! So one year of good practice is only going to make her that much better when it comes time to try out for it next year. She agreed!

After she got over her "fit", she told me Mr. O (her chorus teacher) gave her a copy of a piano and he put a C where the C key is and he asked her to fill in the rest. She did it and then she pulled out her keyboard and began to mark the keys with a Sharpie marker. WHAT?!?! OK...so how could I be mad that she's marking up the keys? 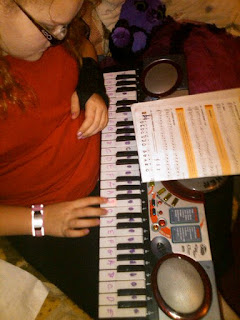 For the next 3 hours, she banged away on the keys and she finally called me in her room. She said, "Hey Mom! Watch this!" and there I stood watching her play "Jingle Bells" on her keyboard. SERIOUSLY?!?! This kid just took her saxaphone music book and learned to play those songs on the keyboard she'd just marked up hours before. I stood there in awe just watching her.

She's happy. She's happiest when music is involved. She's over the moon when she puts instruments to the music. Yes, it drops her blood sugar but she's found a TRUE LOVE. She's so determined and she knows this is what her passion is right now.

So what do we do now?﻿ We feed her passion! My Mom has printed off sheet music for her and she's going to surprise her with it. Kayleigh is getting her a music stand with a light for Christmas. And we've decided it's time for us to look for a saxaphone to purchase that won't break the bank. We know she's not giving this up anytime soon!

what an amazing girl!

Thanks for sharing such an inspiring story :)