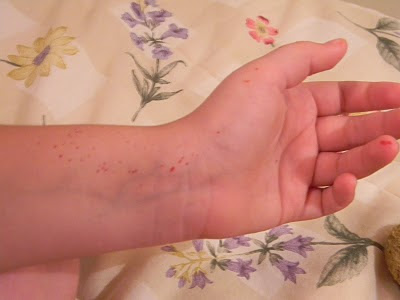 Prick...Squeeze......OOPS!!! Guess the squeeze was a little too hard because it ended up shooting up her arm. Kacey laughed and said "Hey Mom! It's looks like crime scene splatter!" LOL!! Ya think she watches too much "Crime Scene Investigation"? She's so funny! I guess she hit a little vein when she was testing her blood sugar.
at 10:52 AM 5 comments:


So for those of you not on my Facebook...heres a bit of an update:


Kacey had her Endo appointment a few weeks ago. Something I wasn't prepared for since they changed her appointment date to an earlier time due to a scheduling conflict. I knew it was going to be bad and with me being sick, I knew I wasn't going to handle the "bad news" very well. Kacey has had some nasty swings lately...400's down to 60's with tons of IOB. She hasn't had a period the last 2 months...welcome to the world of irregularity! She's been reviewing for those blasted SOL tests so I know school has been stressing her. Yeah, yeah, I could go on and on with more excuses but I'll save you all the boredom. So...our Endo went out and came back in with the A1c results.... 8.9% (up from an 8.6% last time) I felt like a bowl of JELL-O in the chair. I didn't know whether to cry or scream. I replied with a "Yikes!!" and her Endo smiled and said "It's ok though. In all fairness, shes had strep twice, bronchitis once and she grew another INCH in 3mo! You know we want her to be below 8.0% but during times like these, that just isn't possible so it's ok, just continue to test as much as you are and we'll try for a better number next time." Yep, I cried! As sick as I felt, he made me feel like I wasn't going to receive the Worst Mother of the Year award. Did that make it all better? NO! But it eased the blow. Kacey is now...57in tall!!! Thats 4ft 9in and shes only 10 years old! He said her height and weight are fine and shes doing a great job testing. He checked her over...feet, eyes, ears, teeth, spine....all 100% fine :)

I was in and out of the doctors the last few weeks...even had a trip to the Emergency Room. My cough had gotten so bad that I was worn out and not able to get out of bed to function. It was terrible! I go see an Asthma & Allergy specialist on Friday so I'm hoping that will reveal something. Being sick and still trying to be a Mom of a Diabetic and a Teenager is EXHAUSTING!

Mother's Day came and went and it's mostly a blur. I was sick and really had no appetite so the cookout that we went to at my Mom's wasn't as fun as usual. I did get some nice gifts from my hubby, girls and my Mom. The big gift included a new elliptical trainer. Well...its not really "new" but it's one I wanted and we found on Craigslist for cheap :) The guy was moving and needed to see it fast. Sadly, my lungs are not strong enough to get on it for anymore than 5 minutes at a time. I'm hoping in the coming weeks, as I start to feel better, I can hop on it like I used to at the gym.

Speaking of gym, I cancelled my membership. Bitter sweet moment for me. Since I am a school employee, it only cost me $20 a month to go. Well...all the work I was doing...I wasn't able to go and it wasn't being used. I felt guilty for not going and still paying for it so I signed the papers to cancel it.

WoW! Trying to think back over 6 weeks is hard! It's probably easier to just update from here on out instead of thinking back...LOL!

OHHHHHH!!! We started planning Kayleigh's 16th Birthday Party!!! OCT 2, 2010 is the BIG DAY. She will be 16 on Sept 29th and we will have her party that weekend. I've booked the place already. The theme is....HOLLYWOOD. She's sooooo excited (and so am I!!). Her real dad has a limo booked to pick her up and drive her around with friends for an hour. We will ask the guests to arrive at 3pm and Kayleigh & friends are due to arrive at 3:15pm so the guests can be the paparazzi. I have a friend that is a photographer (the one that did our family pics) and she's volunteered her services so we're going to be doing professional pics of anyone that wants them in front of the backdrop with the big "Hollywood Blvd" sign. It's semi-formal dress so we'll be dress shopping soon. I'm also buying several disposable cameras for her friends to use for fun. The cake....well....that was a bit of a fuss! She wants to do her own cake :) She told me what she wanted but she's got the vision in her head already and she said if someone else makes it and it's not what she's visioned then she will be disappointed. So rather than have her disappointed....she's gonna make it herself. She's already designed it and it will be 3 tiers! I have several friends that have offered to make food so I'm thrilled about that. LOTS of exciting ideas and we're officially down to 4 months!!

Update on Chloe...she's a MESS!! Hahaha!! She gets into everything, just like a toddler would and she's demanding of our time. That wasn't a good thing when Kacey and I were both sick. Chloe wanted to play and we wanted to sleep. Last night, we were playing "fetch" with Chloe inside trying to get rid of some of that energy shes got since it was storming here. After I'd had enough of her barreling through my living room, I told Kacey to take her to her room and play. Kacey has a new bed (Frankie's Aunt gave Kacey the bed that was Granny's last week) and so there is room for them both in the bed and Chloe was bouncing around the bed and wouldn't settle down. So I went in there and tried to get her to settle down...no good...she was determined to play. After about 5min of me being in there, she all of a sudden settled and put her head up at Kacey's shoulder and nudged. It was REALLY cool to watch and I told Kacey to check her blood sugar just to see what it was. She was a 77 with 5 units of IOB!! Could this have been Chloe's FIRST alert? Or was this a fluke and she just wanted a "hug"? Either way, it made us stop and think about it and Kacey had not even felt herself going low. I'm hoping this is a start :)

Well...I think thats about it! I know there is tons I've missed but I'm just going to update from here on out instead of try and go back. If I think of something important then I will post about it in another post :) So sorry for all that I've missed. I try and read blogs as I can but being on dial-up at home doesnt help! I can't always post but PLEASE know I think of ALL of you often. I hope to get back in the chat mode soon :)
at 7:45 AM 2 comments: