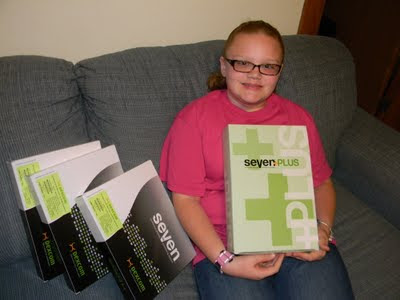 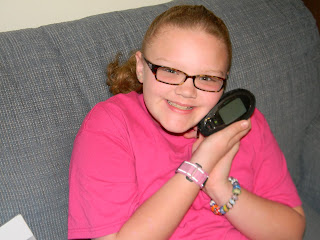 Daisy came by Fed-Ex on April 6, 2011. Kacey was thrilled with her arrival! I, on the other hand, was completely overwhelmed with the opening of the box. I felt like I did 2 years ago when we opened up the pump. What is it? How does it work? What does it do? Those have been questions I've been asked over the last week so I'm going to share a bit about how it works and what made us make the decision to get it.

Over the last few months, Kacey's ability to recognize her lows has decreased. She won't feel the lows til she is in the 40-50 range and by then she's almost to the point that she can't treat herself because she's too confused. This really started to worry me! And then....the worst combative low EVER.

We had gone over to our friends for Family Night. This usually consists of the kids running around playing, a yummy dinner, more playing and the adults playing cards or watching a movie. This night wasn't any different. We had dinner....she was in the room playing...and then she came out dragging her body and plopped into the seat beside me at the table. I'd just been dealt my hand for a game of Spades and was arranging my cards when she says, "Mom....*head in her hands* I'm really low!" So I layed the cards down and asked her "HOW low?" She said, "I don't know? Just REALLY low!" So I sent Kayleigh running for her bag. Meanwhile, her buddy went and grabbed a juice from his cabinet. (Yep! Her friends are catching on!) She couldn't even get herself together to test! She stuck up a finger and I tested her....**47** CRAP! "Kacey, do you want glucose tabs or juice?" She snapped back, "Neither!" So I explained she didn't have a choice and asked her again. She once again, put her head in her hands and screamed back, "I don't want ANYTHING!" So I calmly told her if she didn't drink or eat the glucose tabs then she WOULD get glucagon. I grabbed the juice and put the straw in it and held it up to her mouth. She shoved my hand away and screamed, "STOP IT!" Everyone kept telling her to drink and I could see it was escalating to the point that I had to remove her from the table and take her to a room alone. I took her by her arm to help her up and she literally threw a temper tantrum and I practically had to drag her to the other room. I sat her down and explained that if she didn't drink then she WOULD pass out so she had to drink the juice for me. It was almost like I had gone back into time when she was a toddler. I was trying to bribe her to eat. CRAZY! So I did what I did when she was 2....you sip and then I sip. We did that till the juice was gone but what she didn't know is when I sucked up the straw, I wasn't really drinking it :) Ahhhhh yep those little tricks we use! After 15 minutes she was still only a 56. Ugh! More juice? She cried just thinking about it! So I brought out the dreaded glucose tabs. The ones she USED to love eating but now refuses to eat! "Just 3 of them for now...ok?" She grumbled some more but decided she'd drink another juice instead. Another 15 minutes later...only a 68. DANG IT!!! She was feeling really crappy and just layed there crying. As she sobbed, she told me she was sorry for smacking at me and yelling at me. I ended up in tears with her because I knew she couldn't help it but now she was aware enough to know what was going on. I HATE THIS!!! I hate that her body does this! As we sat there, I knew we needed the CGM more now than ever. It was going to become a very useful tool for us. After a few minutes of convincing, she popped 3 glucose tabs and once she came up to a 116, she was ready to get up. We walked back into the other room where everyone had moved from the table to the TV. The game was over. The kids were settled down. It was time for us to go home. Kacey was scared she was going to drop again and if it happened then she wanted to be in the comfort of her own home. So we left. Now....if we had the CGM, then she would be able to SEE that she was rising and have the confidence knowing that she wasn't going to drop and if she did then she'd know enough in advance.

Dexcom. What is it? How is it used? Why does she need it? Does she have to have it because her diabetes is so bad? Do you stay attached to it all the time? Do you still have to test? Is it accurate? Will this tell her to test? Does this take the place of her pump? Does it hurt? I've been asked all of these questions over the last week. I've tried to answer all of them to the best of my knowledge but as most of my D-Momma's know...they are MUCH more experienced with this than I am! I know several friends are interested in knowing how it works but were afraid to ask....so here ya go!

What is it and how does it work?
Dexcom is a CGMS or Continual Glucose Monitoring System. A CGM monitors your blood sugar in real time. It tells you what your blood sugar is every 5 minutes and shows you an arrow that indicates what direction your blood sugar is headed.  The sensor is inserted into the skin (much like her pump site is) and it transmits the blood sugars to a receiver that shows you a graph of the blood sugars. Kacey still checks her blood sugars like she normally does and she puts those numbers into the receiver and it helps to keep it callibrated. It can be worn for 7-10 days before it needs to be changed out. (Her pump site gets changed every 3 days) She wears the reciever around her waist in a pump pack with her insulin pump.

Why does she need it?
This device will help us gain better control of her blood sugars but it will also give her a little reassurance when she feels herself going low or if she is low then it will show her that her blood sugar is rising back up to safe range.

Does this mean her diabetes is bad?
NO! This means we can keep her as healthy as we possibly can.

Does she stay attached to it all the time?
Dexcom works wirelessly with a transmitter that is attached to a sensor in her skin. She can keep the Dexcom receiver within 10 feet of her and still get a reading on it. She chooses to wear it in the pump pack that my Mom made her that lays flat around her waist.

Do you still have to test?
YES! This doesn't take away the blood sugar testing. In fact, she's testing just as much as she always has but only now she is able to see which direction her blood sugar is headed. (This has been WONDERFUL!!!)

Is it accurate?
When we did our first Dexcom trial in 2009, Kacey had only been on her pump a few months and she was only about a year into her diagnosis. We found it to be very inaccurate and at that time it wasn't something for us. NOW....we're 2 years into her pump and almost 3 years into diagnosis and we're at a different point in our lives. Kacey's hormones are kicking in full speed and she's having lows come out from nowhere for no reason. So it's a useful tool that we're ready to tackle head on. After a week of wearing it, we've found it to only be within 0-20 points off. It's been VERY accurate for her. She gets really excited when she tests her blood sugar with her meter and then sees the SAME number on Dexcom. It's definately gained some trust.

Does it hurt?
Kacey said getting a pump site put in hurts worse than a Dexcom site. I can't tell you which one hurts more because I've only had a pump site put in....and that my friends....HURT! But Dexcom has worked wonders and made the sensor inserter needle the smallest on the market.

I hope that answers the questions that friends and family have been having. (Sorry D-Moms that are on Dexcom's already...LOL I knew you all knew the answers)

We're very thankful for the insurance working so fast for us...along with our doctors and the Dexcom reps. It was a GREAT experience and we're looking forward to what Dexcom has in store for us :)

If any of you have some good advice for me...I'd love it!