A Letter For Kayleigh

Kayleigh's senior project is drawing to a close. We're happy that it's almost over but we're also kind of sad. This journey has been amazing and we've been fortunate enough to meet some new people and get her cookbook out there.

A few weeks ago, she was interviewed for our local paper. We didn't know what would be posted and we through she was going to get a small little blurb in the food section about her book. We were pleasently surprised to find THIS.... 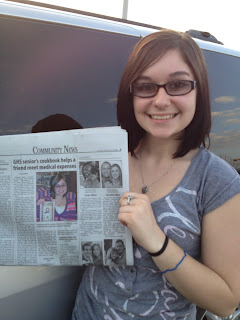 She took up the whole front page of the Community News section! It was such a nice artice and we have to thank Mrs. Betty for writing it.

Then yesterday, we dropped by the mailbox to pick up some mail and she had a letter in the box addressed to her from the U.S. Senate. Hmmm....junk mail? As she opened it, I saw that it was a letter addressed directly to her and hand signed. WOWWWWWW!!! 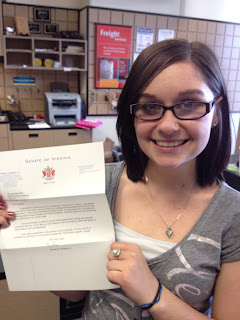 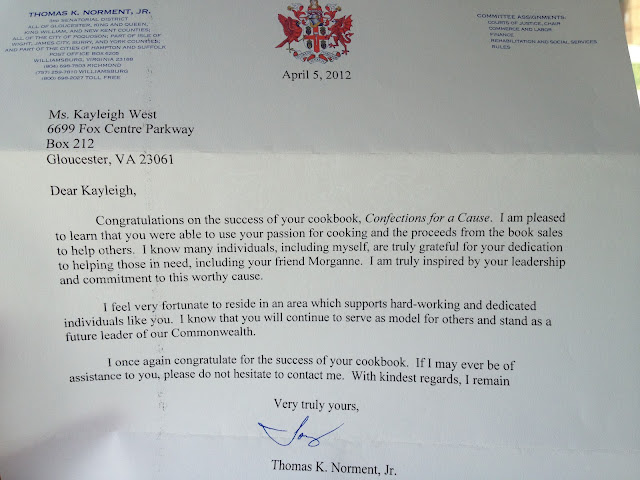 HOLY COOLBEANS BATMAN!!!!! This is one of most awesome things she's ever recieved!!!!

She's worked hard and put in the hours of dedication and this is very well deserved.

There is still time to get your copy of the book if you haven't gotten it already. Feel free to find the book on Facebook by searching for Confections For A Cause. You can contact us there to get a copy. If you have a copy already, how do you like it? Want to write a review for her? Want to help her push her goal of money raised? We'll ship it to you!!! Check her book out on Facebook....you won't be sorry! (Melissa...we just checked mail and got your check and your book is going in the mail today! Thank you for your support!!!)

Kayleigh is due to present her project on April 23rd and she is holding a contest on the Facebook site. Go check it out and help her grow her fan base!

Much love to you all!

On March 28, 2012, Kacey had her endo appointment. Yeah, those are the check up's I always dread because it gives us a snapshot of the last 3 months. I wasn't looking forward to this one because I really wasn't sure what her A1c was going to do. Her last one was a 9.5% and she'd had some pretty crappy numbers...300-400-500 range. Sickening! It seemed like none of the changes we made were actually helping and all they could say was "She's growing. She's in puberty. Theres really nothing you can do." It's frustrating to try and control something that is uncontrollable!

That morning, Kacey woke up and had this on edge feeling. I asked her why she was so nervous but she wouldn't say. All she kept saying was, "I just don't like these visits." Was she feeling my stress? Did she really hate these visits? When we got to the hospital, she started getting fidgety. I handed her my iPhone and asked her if she wanted to play a game. She replied with, "I'm too nervous!" I knew there was more to her story but I knew she'd share it when she was ready.

As she weighed in, she was shocked to find out she'd dropped 12 pounds! WOWWW!! I knew she'd thinned out but didn't realize she'd dropped that much. She's been doing Zumba lately and loves it! I've noticed her being more active and really taking note of what she's eating. And then...growth spurt...AGAIN! She's now 5ft. 2.5 in. GEESH! She's officially taller than her sister...heehee! After all of that...the fingerstick for the dreaded A1c and then we were wisked off to the room and handed the clipboard for Kacey to fill in. She always giggles at these questions and tries to come up with something to write. I could still see she was nervous so I said to her, "You know, whatever that number is, you know it's not because you haven't been trying, right?" She nodded. "You know that you've grown, you've lost weight. You're body is changing and there is nothing you can do to control whats going on inside right now." She nodded again and replied, "Thats not why I'm nervous." Hmmmm.... "So what is it then?" She broke into tears and said, "Every March, my birthday month, I know I have to get bloodwork done and pee in a cup and I just don't like it. I wish it was another month because it feels like that is what I get for my birthday each year." ****SIGH**** I hugged her and told her that next year I would try and make the appointment later so it fell in April and she didn't have to feel like that. Geesh....something so simple in my eyes was a BIG deal to her and I felt like crap!

Once she got that off her chest....she seemed to lighten up for a bit. 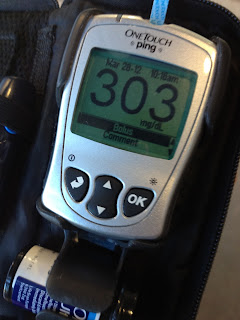 Nerves had officially kicked in! 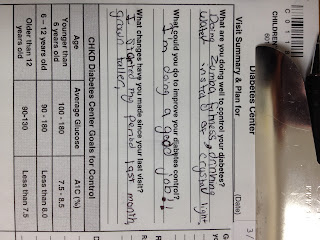 The sheet she has to fill out....ummmm....notice she told him she started her period! EEEK! She didn't wanna tell him that but since she started a long time ago and then it stopped and now it's back, she felt she better tell him. Also glad to know she things she's going a good job with control because SHE IS! :) 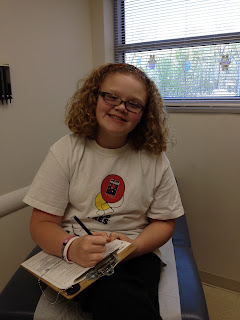 Filling out her paperwork for Dr. R

Dr. R came in and to our surprise he was wearing a SMILE! Her A1c was a 8.3%!!!! She was so excited to see that it had dropped and he was pleased with her weight drop as well. He laughed when we teased him about her being almost as tall as him. It was a GREAT visit! But the time had come to go down to the Lab and her anxious self had returned. We slowly mingled down there and waited to be called back. She started to tear up again and I reassured her that I wouldn't make her go back alone. She was confident she could to the pee cup ALONE....haha...as a matter a fact, she did NOT want me in there with her. We hurried around the corner to the lab and we had a really nice nurse that made her feel at ease. 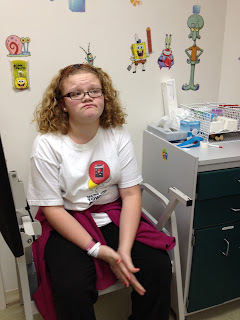 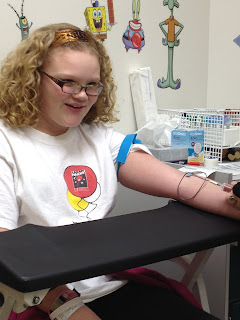 All smiles once she didn't feel the pain anymore 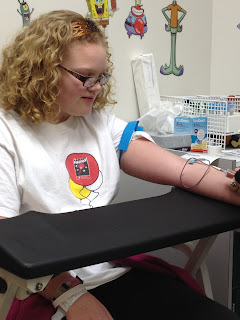 Watching the nurse to everything

Once it was all over, she was fine and she was ready to go for her "treat"! We were walking out and she hugged me and said, "Mommy, you know what I kept saying to myself while we were in there?" I gave her a questionable look, "What?" She smiled and said, "I can do ALL things through Christ who gives me strength." Ahhhhhhhhhhhh! I couldn't wipe the smile from my face! Thats right baby....you can do ALL things...not some things....not one thing....ALL THINGS! My goodness I love this kid!!! :)

And as promised....we went for Sweet Frogs....the "ice cream that doesn't spike her blood sugar". 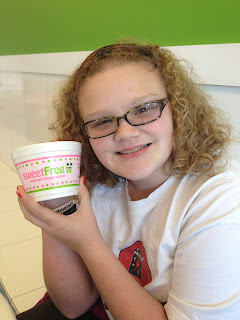 As hard as it is to parent a child with diabetes, it's days like this that I'm reminded how thankful we are to just have her.
at 10:32 AM No comments: