We'd like to first take the opportunity to thank Noah, The Diabetes Dude, and his family for taking the time to mail this package to us. We're so greatful to be the proud owners of one of the flock of blue flamingos that are circulating the world.

On December 8, 2010....WE WERE FLOCKED! Deputy arrived on our doorstep while Kacey was at school. When we got home and she saw who the box was from, she started to jump around like a wild monkey. 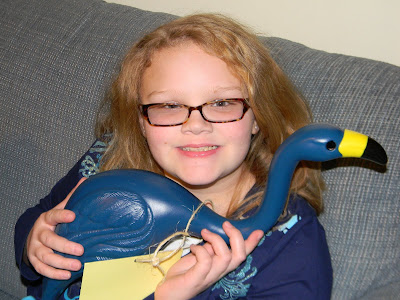 Kacey and Deputy became "instant friends". She is so excited to take him and share him with the rest of the world. His first trip will be to our Endo's office next week for Kacey's A1c and diabetes check. We're hoping to get a few great pictures to share! 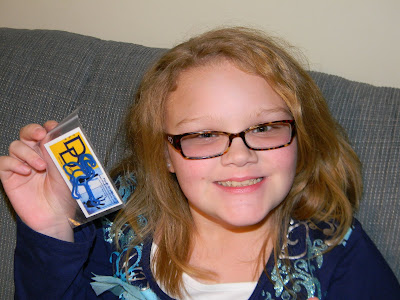 Noah also threw in some pretty cool silly bands. Silly bands became a hit in our house over the summer and the girls tried to outdo their friends to find unique bands. WELL.....Noah provided us with bands that NONE of their friends have and they can only get from The Coolest Diabetes Dude around! Thankfully he sent us a few packs so Kacey is sharing them with her very best friends as she educates them more.

THANK YOU AGAIN Noah and Family for Deputy and I promise that we will continue to share pictures as he makes his journey around Virgina.


ANDDDDDDDDDDDDDDD........
For those of you that are interested...which I'm SURE you won't be ...HAHAHA... Nicole over at We Cara Lot Blog is offering a pretty cool giveaway. I'm not telling you about it here because you have to jump over there and read all about it! LOL!
at 1:08 PM

YAY for the flock! And the Sugar Bolus at We Caralot is awesome...I shared it for more entries for me...but was hoping not too many enter to up my chances - LOL.

Those silly bands are cool! Yay for Deputy and for the Diabetes Dude!