Thats exactly how I feel about diabetes lately. I feel like diabetes has snuck in and robbed Kacey like a thief in the night. On Thursday night and Friday morning, the lows and spikes from the juice had taken it's toll on Kacey's poor body and she was completely wiped out. She ended up on the couch...just laying there like every single bit of energy had been sucked out of her. Over the weekend, the lows were still there but they were spread out. This morning, she woke up with a headache. She grumbled when I tried to wake her and that always is a true sign of a bad diabetes day ahead. She got up and had some breakfast and even though she was a 169, she was moving slowwwww. I drug her on to school and my phone rang about 11:45am. I looked to see who was calling..."SCHOOL NURSE". I held my breath as I choked out a hello. Kacey was in there...blood sugar a 118...lunch was in 15 minutes and she had NO appetite...she was cold...her tummy hurt...her head hurt...her throat hurt....and she was tired. Kacey wanted to come home. DAMMIT DIABETES! You've robbed her of ANOTHER school day!

I stopped asking God a long time ago..."Why me? Why Kacey? Why our family?" and I embraced the fact that this is how we had to deal with things and live our new life....but when we have days like this...it makes me so angry! There are so many times I think.... What if Kacey didn't have diabetes and could actually function to 100% in a school setting? What if she didn't have to worry about those lows that I know she's scared of? What if she could actually concentrate without diabetes sneaking in and robbing her thoughts? When we got home the other day, she cried and I wasn't sure what was going on. She told me she was scared. Scared?!?! Scared of what?!?! She is scared she is going to go low at school and there will not be anyone around to care for her properly. (**tears**) We went through this before and for some reason she's feeling insecure again. Not sure what happened unless it's from what happened at lunch on Thursday or something else going on. Somehow I have to figure out how to give her that security back. I'm thinking we might need another teacher conference with her included. It's not the highs that scare her because she can function and treat those but when you have those lows and you feel like you can't care for yourself on your own when thats what you've been doing then I think it worries her. She's had a couple of lows in the 50's recently and she knows that I can treat them for her but they've been those lows where she just sits there and closes her eyes and lays her head back. I know it weighs on her mind...what if that happens and Mom isnt there to treat them? She needs to know there is someone else that CAN treat them for her at school....OR maybe thats just one more reason we need the cell phone!

I got her progress report today and she seems to be above level on everything and I know there are days she struggles with getting things complete because her brain is fuzzy or shes just too exhausted to do them and yet I still wonder what her full potential COULD be? I looked at her days missed... 6 out of 36. Now in all fairness, she did have surgery for the tumor and a broken arm in the middle of all of this but there are days like Friday and today that sneak in and it makes me sad. Last year she missed 24 days and still ended up on Honor Roll!


Now...in the middle of all of this...I took her back to the orthopedic doctor. Her broken arm is not healing as fast as it should so she has to stay in the splint for 3 more weeks...bummer! So we come home and she is walking up the front steps and she trips going UP the steps and hurts her leg and then she gets in the bathroom to pee and she falls into the wall and hits her face. YES! I immediately checked her blood sugar and she was HIGH and now she's got a beautiful black eye! 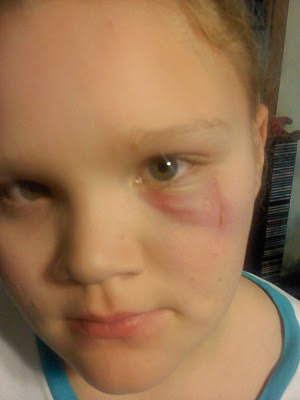 So was it the confusion and loss of balance from being HIGH or was it just Kacey being clumsy? I won't ever know because she doesn't even know! LOL...I told her she better stop getting hurt of Dept of Social Services was going to be knocking on our door! That made us both giggle. :)

Ohhhh and a bit of exciting news... I WON! I WON! I WON! Yes...I won the contest over at Nicole's blog, We CARAlot Blog for the PJ Giveaway. I'm so excited! I entered the contest for Kacey so as much as I wanted those blue circle jammies for myself...I ordered them for Kacey :) She was so excited and I let her choose the ones she wanted. THANK YOU Nicole for drawing my name and THANK YOU to Komar & PJs For The Cure for allowing those special D-Moms to hold the Mega contest! :)
at 4:12 PM

Applause for the moms and dads of your cwds! Your love, care and your persistence are just amazing!

Thanks for the link :) and all I can say is I'm so sorry that D is not behaving for you guys :(

I was wondering what in the world happened to her eye! My goodness that poor girl has been through soooo much lately!!


BIG HUGS KACEY and I'm so happy that you won too because you need something to smile about!! :)

Ebbs and flows. I hope these hard times give into some easier days soon!

Poor girl has gone through a lot lately! I wonder about those same things...how do I know if Ally is acting "this" way because of D or just because she is 7! I'll never know! It was interesting to hear you say that when she has a hard time waking up, you know it is gonna be a bad D day. I have been wondering about that with Ally. Now I will have to take note...