She Continues to Amaze Me

I don't think there is a day that goes by that my daughters don't do something to amaze me. I'm so in love with the young ladies they are becoming and I couldn't be more proud of them.
Yesterday, Kacey did something on the D-side that really floored me. Since the school year has started, she manages her diabetes on her own. Unless she goes really low, the school nurse is not involved, her teachers are not involved, and what happens with her diabetes is between her and Herbie until she comes home from school. She's only had 2 lows at school this year. The first one was a 65 and she couldn't remember where her glucose tabs were. She got a new Vera Bradley Hipster bag and she didn't know where she put them. One phone call to me and she remembered exactly where they were! The second time she went low, she was getting ready for lunch and she was only a 72 so she just ate lunch and she did fine. But yesterday something really cool happened. She has PE once a week and it's midmorning after snack. She packed JELLO for snack.... 0 carbs...uhoh! She had snack and when it was time to go to PE, she tested....92. Hmmm? She knew that they were going to be playing flag tag. She made the decision to eat 1 glucose tab to keep her from going low. When she tested before lunch.... 80! She was so proud of herself because she said that she knew she was only a 92 and all the running would have made her go low and she didn't want to pass out on the field and she knew she could eat 1 glucose tab and it would bring her up enough so she could play. How cool is that? Only 9 years old and she cares for herself like shes 19! I praised her so much for knowing exactly how to treat herself. It's only been a year, but she knows her body so well now and she's so intune with what to look for! I wish there were times she didn't have to be so responsible but in the long run, I'm so thankful that she is :)
Another exciting note....we're still having to do site changes without the numbing cream. Yesterday was also site change day and I dread those days. I've got the "bribery" thing going so I was hoping that would still work. Herbie beeped at her to tell her it was site change. She just gave me this look and I told her to press ignore and I'd give her an hour to get herself together. She smiled and said she didn't need an hour cuz she wanted to get it over with and then asked me if I had a dollar ready? HAHAHA! She took her old site out and I stared at her speckled tummy. Each scar a reminder of where I'd stuck her. Since it's just me and her when we do site changes, she always takes her clothes off so she's not having to hold her shirt up. I turned her around and her hips were just as scarred :( She turned back to me and I asked her where she wanted it? She ran her fingers over her scars and told me that she thought we needed to try a new spot. NEW SPOT?!?! I held my breath as she looked over her tummy. All of her "speckles" are on her sides. She then said, "I think we'll try....there!" and she pointed to a new spot on her tummy that was closer to the front. ***gulp!*** There? She confidently shook her head yes and then told me to hurry before she changed her mind! LOL! I told her that if we did it there and there were no crying fits then I'd give her $5! She smiled as I prepared her site. 1....2.....*deep breath*.....3- *stick* .....waits for tears.....huh? No tears? Nope! She said she never even felt it go in. Wowwwwwww! Then she smiled and asked for the 5 bucks. Ahhhhh! 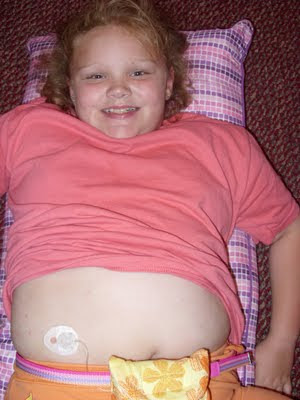 You know, some people might not agree with me giving her money to build her confidence with these site changes but until you're the parent of a diabetic child on the pump and you have to manually stick those needles in while your child is screaming "Please Mommy! Don't hurt me! I'm scared!" then you don't know how graciously I hand over that dollar....or in this case...5 dollars! And where does this money go? Right into her JDRF jar that we throw all of our change into and donate it when it's time for the Walk to a Cure. Sure, she knows that this money isn't hers. Those dollars are a reminder of how much we want that cure! Every site change is a dollar (or $5) closer to a cure! If you add that up over a year....$1 for every site change...$10 a month x 12 months .... $120 for her JDRF team that she will donate in her name! Nope! I don't mind giving her that dollar :)
On the flip side, Kayleigh floored me this week when she asked to join the Spanish Club at school this year. She's taking Spanish 3 and has the same teacher she had last year (thank goodness!). She said she knew it would help her get through the class! She's really buckled down with her grades and she's loving all her classes this year. She is going to apply for a catering job with her Culinary class and she's really excited about that! She will actually get paid for working and she'll gain the experience she needs to further her career.
Both girls just amaze me!
at 1:51 PM

Wow, what incredible young ladies you are raising! I feel that pride for Elise every time she gets a shot now. She just sits on my lap, watches the needle go in, counts to 5 with me, and then says, "all done!" It doesn't even faze her anymore.

What a long way we have come...

Jill- YOU are amazing and what a good job you and Frankie are doing with these two precious young ladies you have. In many ways- diabetes provides a great opportunity for our kids to be more responsible young adults and you are doing exactly what you should be with Kacey. I'm so proud of YOU!

Your girls are FABULOUS and you are a FABULOUS mama!!!

3 cheers for SELF CARE AND SITE CHANGES!!!

Thank you so much!!!

Have I ever told you all how much I love you? You guys are the best support system I could ever ask for!!

Yes, I did have to wipe a few tears before I posted this. Many times, we don't give ourselves the credit and I've always had such a hard time accepting compliments. THANK YOU!

I know how hard it is to change to a new site. It can take my boys months of mental prep to agree to a new one. For your daughter to just decide on her own that it was time, is so brave and amazing!

Terrific kids, but you know that...
The fact that Kacey adds her hard earned money into her JDRF jar makes it NOT A BRIBE.
I think you're going to have to send her to me for a week when I start pumping. She'd be a great trainer.

Great job to both of your girls! :) Also, as for giving Kacey money for site change... I don't see a problem with that. We give Tristan a prize for every 5 site changes that he does without having a fit. In my opinion, anything to make it easier on them. The fact that it's going to JDRF is amazing but even if it went in her pocket.... I think that's ok. She's the one that has to endure multiple finger pricks and site change, why not reward her for doing a good job? Don't we reward our kids for doing their chores, getting good grades, good behavior?? Then why not for site change?

Just my 2 cents! You are doing a wonderful job Jill and I think that your daughters are a showing that by their action.

What a wonderfull idea and daughter for donating her "hard earned" money. Also, thank you from all of our kids who will benefit from what you give.

Awesome Jill! Give both of your amazing girls a hug! Tell Kayleigh that Amber is taking Spanish and joined the Spanish Club this year - I sure do wish we lived close enough to 'hang out'! Sending you love!

AWESOME!! Great job girly!! You guys are doing great and she is doing awesome with her diabetes!

WOW way to go and way to be strong !!! It is so funny that I can talk about Cara's diabetes without getting upset and shedding a tear but through your whole blog I just wanted to cry. I hate that these kids have to go through so much but I'm so proud of them all for there amazing ability to adjust and over come any obstetrical in their way. I think that something like diabetes teaches these children something very important and they are going to grow up to be very important people.