Happy Memorial Day to everyone!
Today is a day to thank the men and women who proudly serve in our military. The ones that put their lives on the line, each and every day, for our freedom. 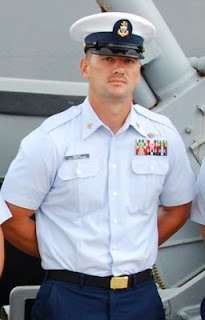 My brother is one of those serving in the United States Coast Guard. I can't even begin to express how proud I am of him. You see, we haven't always been close. We grew up in a military family. Our Dad was in the Army and thankfully we didn't make as many moves as normal military families do. Instead, Dad decided to do several tours on his own to keep us from moving and sadly that had an impact on our parents marriage. When we were in high school, our parents split, making it very difficult on both of us. My brother went to live with my Dad and I lived with my Mom. Weekend visits were extremely difficult for both of us and with that came the riff in our brother/sister relationship. Not long after all of this happened, I found out I was pregnant with Kayleigh. My brother was one of the first called when it was time to go to the hospital. He waited outside for the announcement that he was the proud uncle of a niece! The bond he formed with Kayleigh was amazing. He would stop by to see her and as she learned to talk, her "Guncle Cuck" (Uncle Chuck) could do no wrong. She'd make phone calls to him and babble on the phone for 10-15min at a time. When he made the decision to go into the Coast Guard, I must admit, I knew this would be the best thing for him. He'd been a ping pong ball for far too long and I knew in the long run he'd make us proud. After boot camp, he was stationed in Hatteras, NC. Not too far from home. We made the trip down to see him and he took us to see the lighthouse and around the base. While he was stationed there, he met my sister-in-law, Jenna. She was and still is one of the best things that ever happened to him. They got married and soon after she gave birth to my first nephew, Kylar. I was now in the shoes of "Proud Auntie" and I was thrilled for them! She then went on to have my second nephew two years later, Hunter and then finally a little girl came along two years after that, Abigail. I call her "Princess Abi". Since being in the Coast Guard, they've moved from NC, to Cape Cod, then to Hawaii, then back to Boston and now they are back in Hawaii. I was fortunate enough to go visit them when they lived in Boston and got the grand tour of Boston, the Coast Guard base, the Freedom Trail, and most of lower Manahattan, NY. I haven't had the chance to visit them in Hawaii yet. We were planning to go visit them this summer but when Kacey was diagnosed last summer, it put a crimp in our plans...and our savings! We certainly didn't ask for Kacey's diabetes but it's here to stay and unfortunately we had to decide between Hawaii and medical supplies. This sucked because I know Kayleigh was looking forward to going and she didn't ask for this to happen either. And then...the opportunity came open for Kayleigh to still go. She will leave in 24 more days and stay with my brother for 7 weeks of her summer. She absolutely adores her Uncle Chuck so this is going to be a great experience for her.
Back to my brother....during his military career, he's made us proud more than once. The biggest achievement came when he was promoted to Chief this year. He's only 31 years old, been in the Coast Guard for 13 years and managed to climb the ladder and make us proud. He just attended the Chief's Academy and earned several top honor awards. It makes me smile to think about how he went from a rebellious uncontrollable teenager to this grown man that has a miliary career to be so proud of. He's really come a long way! As for our brother/sister relationship...well I think we're closer now than we've ever been. I love him so much! He's not only a dedicated USCG Chief, he's an amazing husband and loving father...but most of all....he will only be a brother to ME! 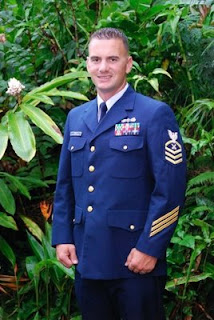 So for today, and every other day, I say...THANK YOU Bro for putting your life on the line for our freedom and for making us proud. I LOVE YOU!
at 6:48 PM

What a beautiful tribute to you brother!

I agree with Wendy. It is so easy to look at Memorial Day as just a Monday holiday, but, it is so much more than that.
And, might I say that he is one gooood looking dude!

Thanks Sis! Many people look at today as just another holiday or a free day off work, but it is people like yourself that take that moment to truly indulge yourself with the true meaning of memorial day. Honoring those serving home and abroad, who have made the ultimate sacrifice, protecting our freedoms, something so many have lost sight of and taken for granite.

Thank you again for your warm comments. We had a rocky road, but thankfully it was nothing more than a trial to strengthen our bond as brother and sister.

And don't worry about that lil' turkey. She will have a blast while she is here. Definitely some memories she will never forget.

OK, enough about me, take a second and google the name below. This is who I honor on Memorial Day. Nathan gave the ultimate sacrifice and was taken from this world entirely too early. When he died, his wife was three months pregnant with their first child, a beautiful little girl who will grow up with her dad in pictures.

Great post Jill! I can see why you are so proud of your brother! It's people like him who make our way of life possible!