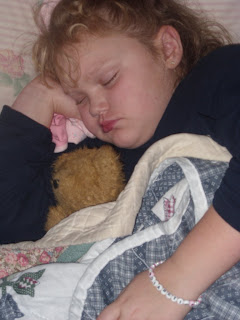 It's mornings like this that I say "Damn Diabetes!"

Kacey was up coughing again last night. The cough med with codiene seemed to calm her for about 2-3 hours and then she'd start coughing really hard til she gagged. I brought her out to the couch so I could hear her and be closer if she needed me. Her blood sugars still bounced in the 200's through the night and she's just feeling miserable. So this has robbed her of another day of school. Her morning blood sugar was a 199 and she's gone back to sleep. She's had such a hard time shaking these colds and when I spoke to the nurse yesterday she explained to me that from now on it would be very hard for her to get rid of a cold like this because it takes such a toll on her immune system and the diabetes is already doing that. Dammit! I feel so helpless somedays! I hope that antibiotic kicks in soon!
I am now starting with the stuffy nose and sinus pressure...grrrrr! Whenever the girls get sick, I spent sleepless nights taking care of them and then I end up not getting my rest and then ....BAM! I get the cold that I've been desperately helping them fight. I give up! I went on and took some cold meds and hopefully since its at the beginning I will catch it before I get hit hard with it.
Other news... we will be missing the annual Christmas parade tomorrow. The high temperature is only going to be 42F (if it gets that high) with chance of snow flurries and wintery mix (yuk!) and the wind is a northeast wind so its gonna be COLDDDDD and I can't take the girls out in weather like that with Kacey being so sick and me starting with a cold. So we're going to pass this year.
At 4:30pm we will get to see Frankie's sister, who we havent seen in almost 7 years! She is flying in today and tomorrow we are going to a family party. I'm hoping Kacey feels well enough to go!
I hope you all have a wonderful weekend!
at 7:01 AM

Damn Diabetes is right. I hope she's feeling much better soon. Sorry about the Christmas parade. :(

Ugh!! There are days you just can't help but curse at this darn disease. I'm so sorry for Kacey..she looks miserable. I hope she gets better for the family gathering.

I must tell you I did have to chuckle at the 40 degree weather! Being in MN that is a heat wave for us. I think my car thermometer said 12 yesterday and this morning!:-)

Karen- I know it sucks about the parade!

Lynnea- Actually Kacey was sleeping peacefully in that pic LOL ...it was about an hour after she took the cough meds and she was finally quiet. YIKES!! @ the thought of 12F!! Whew...thats REALLY cold. I dont even think on our coldest days it gets down that cold...maybe at night.

Being sick with diabetes sucks! You feel like crap already and then your blood sugars start doing crazy things on top of that. And that makes you feel even worse.
I hope she is feeling so much better already.