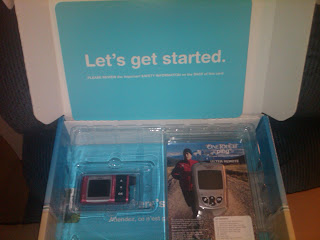 I've never been so happy to see the UPS man. I know he thought I was insane as I danced on the porch when he pulled up. He wouldn't understand, would he? As I signed for it, I explained there was a $5000 piece of equipment in that box. He laughed and I told him it was Kacey's new insulin pump. He smiled and I knew he didn't understand how important this box was to us.

Kacey was in school when it arrived but I could hardly contain my tears as I popped open the box. I felt the angels singing when I saw this beautiful little machine staring back at me. I wanted to hold it. I HAD to hold it. I pryed open the plastic and I held it for the very first time. I wanted to put the battery in it right away but I felt like I needed to wait for Kacey and we could do that together. So I pulled out the materials and I spent the afternoon reading. I feel like we're going from a flip cell phone to an iPhone! I'm so excited for Kacey.

I ended up taking to box with me when it was time to pick her up from school. It was so exciting to see her face when she saw the box. She walked out with 4 of her friends. They all knew the pump was coming so they were just as excited to see it.
"Wowww Kacey!"
"I'm so happy for you!"
"Kacey, thats so cool! It looks like a little TV"
"I love the pink!"
Those were all comments flying out of their mouths as Kacey held her pump in the box. We got in the car and she said, "Mom! I wanna hold it! Pleaseeeeeeeeeeee! I just want to feel it!" She took it out of the pastic and held it in her hands. She hugged it. She kissed it. She cried.

Sometimes we forget how attached these kids get to these little devices that keep them alive. Some kids get more attached than others do. Some could care less. Some are too young to understand yet.

I remember when Herbie first arrived. It was like watching that bond form all over again. New pump. New name. New bond. I could barely hold my tears back as I watched her in the back seat. When we got home, she ran inside with the box and opened it up. We put the battery in and gave the pump life. 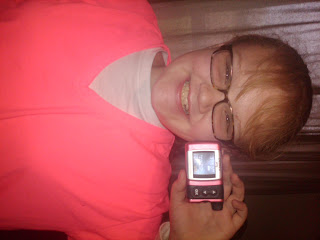 Isnt this the prettiest pink pump you've ever seen?

Check out that smile! She was so excited to see that beautiful screen lit up! She sat in the chair just staring at it. Then I saw the tears flowing again.
"Kacey? Whats wrong?"
"I love it so much but this means I only have a few more days with Goober."
***crap! I knew this was coming!***
"It does and this means you can cherish those last few moments with Goober before you switch over on Tuesday."
"Tuesday?"
"Yes, I talked to Kristen and we go down to the big hospital on Tuesday."
She smiled through her tears. We have a date set. Tuesday at 10am. We have to make the drive down to the big hospital and thats always a bitter sweet moment because it's a reminder of where we were 3.5 years ago. It's a reminder of how sick Kacey was. When we drive that long hour and a half drive, I think back to the drive we made that day she was diagnosed. I replay the events in my head.

We put the batteries in her meter and we talked about how the system will work. She's excited about the remote. She's excited that she won't have to pull her pump out of she doesn't want to. She's excited to have a new life full of dresses again. Yes my friends....sometimes it's the little things that we miss. She won't have to go diving up her dress in search of her pump. It's going to be nice. Then I got a smack in the face. CRAP! This meter will take One Touch strips and we're using Freestyle right now. So I had to call back to the doctor and have them call in a new script for One Touch strips. I know once Kacey starts using the new meter, she won't want to go back to using the other one.

Now the countdown begins...TUESDAY is the DAY! :)

oh I am so happy for you!! I know I am loving Joshua's Omni Pod. I know I havent blogged in a long time but we switched in October..