As you all already know, I spend Saturday mornings with my Mom. We usually go to breakfast at IHOP and then we run any errands that we need to or we do a little shopping. So this past Saturday wasn't any different. We woke up at 6:30am...left the house by 7am...got to IHOP by 8am. We talked with our favortite waitress, Aly and she placed our regular orders. We sat there catching up about the weeks crazy events when in walked a family that we'd been hoping to finally "meet". Kayleigh is friends with a boy in school that has a little brother that is 11 years old and he was diagnosed with Type 1 in 2009. They talk about their siblings in class and Kayleigh kept telling him that we needed to get them together. Well.....here was our chance! We didn't say anything to them just yet. It didn't take too long for our food to come out and as usual I turned to Kacey and said, "Check your blood sugar." She pulled out her pump and the Dad told the Mom and Son to look. We acted like we didn't hear anything and kept on like we didn't see them watching her every move. Kacey tested, she dosed and then she plowed into her breakfast...egg & cheese omlet, hashbrowns and pancakes! It didn't take long for the other family's food to come out. We didn't want to look like we were watching them so we couldn't see if he tested or dosed. We knew he wasn't on a pump. He's scared. His Mom is scared. Ohhhhh how I remember those feelings! Should I turn to them? Should I make small talk? I wanted to just blurt out...I KNOW WHAT YOU GO THROUGH! I knew it would be rude while they were eating to try and carry on a conversation. After all, they didn't know me. Would they think I was a creeper if I said, "Hey! She had diabetes too!" Ahhhhhhhh......so we waited for them to finish. We ate our meal. We were given our checks about the same time and Kayleigh finally said, "I'm gonna say something!" .....and she did! She leaned over and asked them if they were K's family? They replied, "Yes". She told them her and K were in the same class and they talked about their siblings.... (pointing to Kacey) "She has diabetes too!" That opened ther avenue. We found out they go to the same doctor's office. He's a year older than Kacey so he's already in middle school but he told her there were 4 other diabetics at the school to which Kacey replied, "That's so cool!" COOL? Ughhhhh...it's NOT cool but I guess in their eyes to have another person going through the same things they are is kinda cool. So...what does Kacey do? She gives him one of her cards from Diabetes Dude and a blue flamingo silly band. Now...THAT was cool! :) I told the Mom to find me online and we could get them together.

It's always so neat when you meet another D-Mom that really "gets it". We didn't get into all of that while we were making small talk but she did mention that he was still on shots and they were battling the hormone issues. I wanted to get up and hug her. I wanted to let her know that I felt her pain. I wanted her to know that we're battling those same issues. I wanted to sit for hours and talk with her and compare stories. It's funny how you may not even know someone but when you have a common bond like this then you feel like you've known them forever! 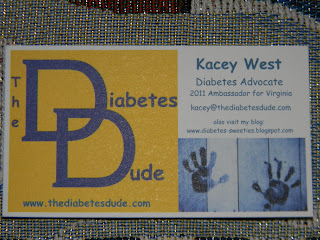 Way to go!!!! I don't believe in a coincidence. I firmly believe that God places us exactly where we're needed. Your daughter was able to give that family peace knowing that everything will be ok. You have invited them to your blog and now they can become a part of our huge d-family support system.

I know the feeling and excitement when you find people who know how your life is :)

You rock Kacey!! You are one amazing little girl....very proud of you....so brave to stand up and help someone so selflessly!