I haven't done a kitty update in a while. Fortunately we were able to find homes for all but 2 of the babies. A friend of mine took them up to the vet for me and we found out the sex of them because I wasn't able to tell...LOL! The girls had fallen in love with the runt and I told them they couldn't keep it unless it was a male. When they arrived home from the vet, the girls were practically doing cartwheels when they found out that the litte gray one was a boy! He already had a name... "Junior". My friend and her neighbor took the females that looked like Miley. One of Frankie's friends took the other gray female for his kids. That left us with Junior and the other male that looked like Miley. Since it had been so long before we were finally able to touch them, this little male was wild. He'd hiss and spit then wouldn't let us pick him up. He'll come out when we're around but we can't touch him. Maybe in time he will come around. For now, Junior is being spoiled rotten! Here are a few pics to show just how rotten he is!


Here he is cuddled in Kacey's arm. He would sit there for hours if she let him! 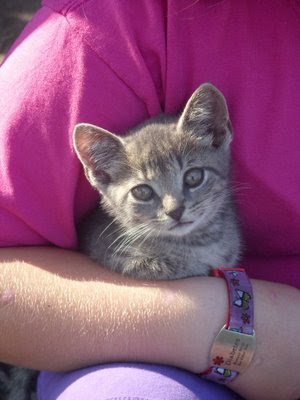 Yes...thats him sitting in the basket! She found an old basket and started putting him in it. He'd just sit there while she carried him around the yard. 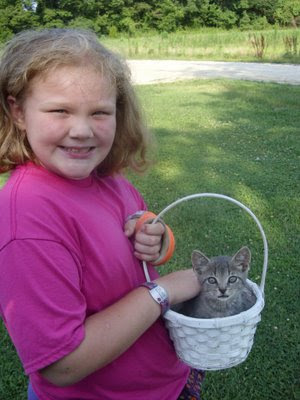 Guess he got tired of sitting....cuz then he'd just lay down like a baby while she carried him. 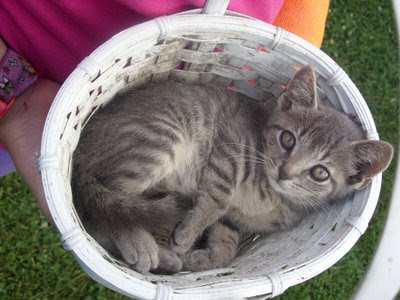 And then...the picks him up and throws him over her shoulder like a baby....and he just lays there!! 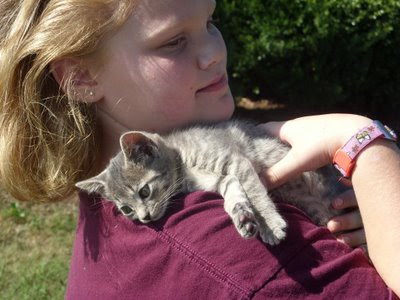 So "Junior" will be taking Henry's place outdoors at our home. He's already following Miley around the yard and actually participated in the feast of a mouse! BLECH!
at 8:49 AM