Kacey and I went running errands this morning. She ate breakfast before we left so I knew she'd be good while we were out. Since we were going to be coming back home at lunch, I decided to treat her to Subway. We got the subs and we were on our way home when she quietly got out her test kit to test her blood sugar. I thought she was just doing it so once we got home, she could eat right away. A quiet voice said, "Mom, I'm a 43." I thought I heard her wrong. "You're a WHAT?" She had the "low look" all over her face! "I'm a 43, Mommy and I'm shaky." I pulled the chips out of the Subway bag and had her start eating. We were only 2 miles from home. We got home and I got out of the car and started walking to the door with our shopping bags. I turned to see Kacey still sitting in the car! I dropped the bags and walked back over toward her as she slowly got out of the car. "Are you ok?" She just gave me this "I don't know" look. I helped her to the house and got her to the couch. She was drenched in sweat! She's gotten sweaty before but never drenched. Her legs and arms felt like she'd just stepped out of the tub. I gave her something to drink while I got her sub out. 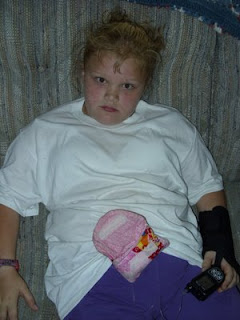 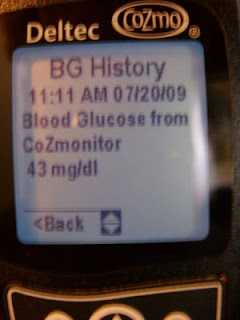 She started eating but I knew she wasn't going to come up too fast. I watched her little hand shake as she brought the sub to her mouth. The tears began to run down her face. "Kacey, what's wrong?" ... "Mommy I'm so hungry but I'm scared because I still feel low." .... "Ok...let's test so you can see that you're coming up." 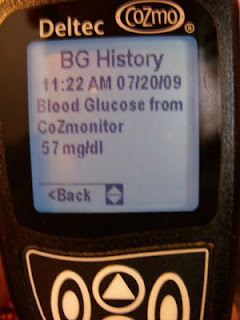 After she saw that she was coming up, she started to calm down. I think she's so afraid she is going to keep dropping low so just seeing that she was rising helped. Although, she continued to shake and say she was cold. Poor thing! :( After she ate, she sat on the couch bundled in a blanket. She started to cry again and I asked her what was wrong? She wanted to test again to make sure she was above 80. She pricked her finger ...no blood. So she tried again...and got a double dose! LOL! 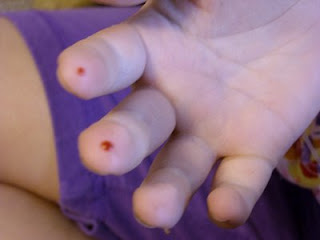 We both giggled since she had her choice of which finger to test. She'd come up nicely.... 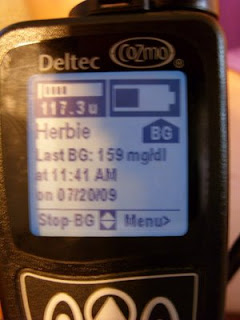 But she was completely wiped out! 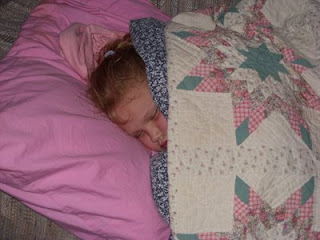 She went right to sleep on the couch and she's been asleep for over an hour now :( Damn diabetes! It's completely robbed her of her day because she'll spend the rest of the day playing "catch up" to gain her strength back.
Just more proof that diabetes is so unpredictable and you can be having a great day and all of a sudden it can sweep you off your feet and you begin your roller coaster ride. It's now 1:10pm and I just tested her and she's bounced up to a 255....and STILL asleep!

Those lows wipe Addy out too :( I hate these moments.

Sometimes Addy acts completely fine -- other times she's down for the count for a few hours.

It must be going around because Addy was 45 during yoga again...sigh...

Lifting up Kacey (and her mommy) in prayer today.

I can so relate to this! It kills me to see Janelle knocked out from a low or a high! I can only imagine how crappy it must feel to have those fluctuations. I hate that they have to go through this!

We must all be careful to check sugar supplies and keep them handy. Glucose tabs, individual large wrapped lifesavers, skittles, on the person, in the purse, in the dashboard drawer, everywhere. Had to hunt around at home recently (OJ gone; extra OJ in the downstairs refrigerator, glucose tabs not on kitchen table or by her bedside, no more juicepacks in fridge). We had a near-miss also. Potato chips are slow to raise blood sugar. You could have ripped off some of the bread from the Subway sandwich, making sure it was on the outside (without any of the viniagrette on it) and the sugar would have broken down in her mouth. Hard to think though, when you are panicked. So glad your girl was okay and bounced back. What a scare!

Anonymous~ We always carry glucose tabs and gel. I have them in my purse, in Kacey's bag, in the diabetes backpack (which also has snacks and juice in it too!) and in the glove compartment. It wasn't that I didn't have those on hand. If she had eaten those and then ate lunch on top of them, it would have shot her blood sugars into the 400's. It was bad enough she went from a 43 to a 255 in less than 2 hours and that was just from chips and a sub WITH insulin. So if I'd of given her fast acting glucose then she would have skyrocketed and puked. She calls it being "sugar sick" and it's when she gets sick at her stomach from her blood sugar spiking so fast. I know different people react differently in these situations and every persons body is different in how it reacts but it's taken us a long time to know how Kacey's body is going to respond and I knew if she ate the glucose tabs then she'd have to wait to eat her lunch, which wasn't fair to her.

Another example is...Kacey's doctor recommends 15 carbs and 15 min later retest for blood sugars less than 70. If Kacey eats 4 glucose tabs....which is actually 16 carbs....then she will spike to nearly 500 before her blood sugar even decides to come down. She actually went from a 42 to a 495 in 15min. Then she threw up! We've tried 3 tabs which is 12carbs....and she still spikes to the 300's. If she is 60-70 range then she just eats a snack and she comes up to a nice range. If shes 40-50 range then we give 1-2 glucose tabs if she's not getting ready to have a meal. If it's lunch or dinner time then she just eats.

A low is gonna wipe her out reguardless of the way we treat it. It's better to have the slower rise in Kacey's case because she gets a sick stomach and then we have that to deal with on top of her being tired and cranky.

Thanks again for your suggestions :)