Last night we had to charge Dex because his battery was getting low. She's been wearing him clipped to her pants but since he was on charge, we had to figure out a way to keep him in range but out of the way so he could charge too. I decided to use Kerri's headband trick. It worked until she rolled over and it read out of range for about 2 hours.

Today we had a break-thru! When Herbie and Dex work together, it turns out to be a beautiful thing! This is the first time in the last 3 days that they were this close. 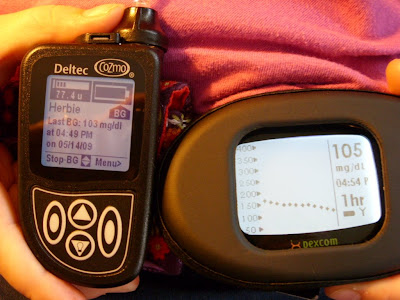 Herbie says 103....Dex says 105....but Mommy says PERFECT! :D
Did it take them a few days to make friends? Did it take Kacey's body 3 days to adjust to the sensor? Did the threat I made to Dex about having to bring me flowers work? Who knows! All I do know is, it is wonderful to see them working together at least once during our journey with him.

We did run into a problem during the day though. When Kacey tested for lunch, she was a 65 (another lunch low) but yet Dex was saying she was an 83. Then there was a point that the little blood drop was showing up...she tested and calibrated...yet it still stayed the little droplet. This went on for over an hour like this. It finally picked back up when school was almost over.

Hopefully Herbie and Dex will start to work together for Kacey!
at 4:48 PM

Yes, it is a beautiful thing when everyone gets along!!!!