Mommy's DO Get Sick!

Ever since I can remember, my Mom always used to tell me "Mommys don't get sick!" and up until about the age of 15-16yrs old, I really believed that. Then my Mom got strep throat and she was VERY sick and I remember crying and telling her "Mommys dont get sick so she can't be sick."

When I had my girls the phrase turned to "Mommys aren't allowed to be sick!" because really we can't be! We have to carry on a household and still manage daily life whether we have a cold or not. It doesn't matter if we haven't slept a wink because we still have to put on a smile and act like we care. This leads me to why I haven't been able to update after the lows. It seems that the lack of sleep and the unwanted stress lately caused my immune system to crash. I got hit with a stomach bug not long after I posted in those wee morning hours. Stomach bug... yes the one that leaves you running back and fourth to the bathroom alternating between sitting on the toilet and bending over it. Between those bathroom visits, I felt like someone had hit me with a bat (or maybe I was wishing they would to put me out of my misery). My whole body was hurting and I started to shake from the chills. Thats how I spent my Saturday...in bed under several layers of covers...and forbidding the kids to get anywhere close to me! Around 2am this morning, my fever broke and I was drenched in sweat. My sick stomach was gone but I could still feel the gurgling. I changed clothes and went back to sleep. Around 5am, I woke up and felt well enough to go check on Kacey. It's a good thing I did! Her site had pulled out!!! She was only a 197 so it must not have been out too long. So here we are at 5am, doing a new site. Thankfully everything went smooth and she went on back to sleep (and so did I!) By around 10am, I was starting to feel like I could eat something so I had some plain toast. So far, so good. I've kept it down but I've got a really bad headache now. I've been in bed almost all day because my body is just physically exhausted. And I think a bit dehydrated (the skin pinch test says I am) so I'm drinking since I can keep it down and I'm just resting the rest of the day (and spraying the Lysol to kill the germs!).
As for Kacey's lows.... She had 2 more yesterday when I was down & out. She dropped to a 51 but came up to a 130 with 2 glucose tabs and then she dropped to a 63 about 2 hours later and she ate 2 more glucose tabs. After that, the lows were gone and she did pretty good through the night and throughout the day today. Since they were getting a bit stir crazy in the house, Frankie decided to take them on a walk. When they came back, this is what they brought me.... 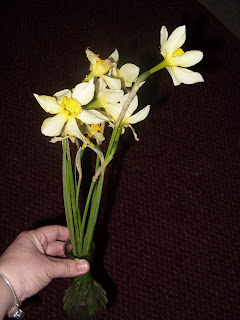 I love fresh picked flowers from the yard. Our daffodils are at the end of blooming season but there were a few stragglers out there that Kacey decided to pick LOL! A bit shriveled, yes! But a wonderful thought :)
at 1:29 PM

Ya being sick is awful. I had that exact same thing 2 weeks ago...mine lasted for 3 days and I was just miserable!! Mom's shouldn't get sick...I agree. Glad you are starting to feel better. Hope it's uphill for a from now on!!

Oh Jill- how awful! :( So sorry you've been sick--- I guess everybody's wishes yesterday for an enjoyable Saturday were, umm.... , wishful thinking? Take it easy today and recoup.. enjoy those beautiful flowers!

Try to take it easy and be kind to yourself. The laundry will get done eventually ;) Put your feet up and watch a movie -- YOU DESERVE IT!!!!

Major suckage. I hope you're feeling back to better!