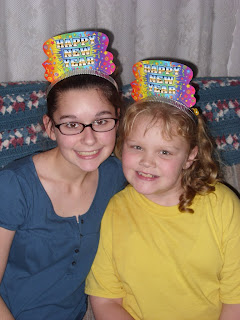 This past year has certainly been a roller coaster ride. Much like day to day life with diabetes. I'll try to re-cap as best as I can :)

January~
I was suffering from a bad round of bronchitis and a sinus infection. I'd been coughing for weeks and waiting way too long before going to the doc. I was put on Augmentin...within 2 days I broke out in hives. Not just a small patch either...these were all over the body, scratch your back against the wall, feel like your skin is crawling hives! I ended up on Prednisone for a week! *grumbles* Not starting off the new year too great!

I suffer thru a teeth cleaning at the dentist (OMG I hate the dentist!)

Start to plan the surprise party for Frankie

Throw a surprise 40th birthday party for Frankie. He thought he was coming to Kacey's birthday and it was his own! Kacey played a huge part in keeping the secret :) and she gave up having a party so we could give him a party...something he's never had!

Both girls get their teeth cleaned

Leave the girls overnight to go to The Funny Bone (a comedy club) and spend some time with friends we haven't been out with in a while.

Kacey takes a class trip to Norfolk Zoo. The first fieldtrip Frankie has been able to get off work and go on. It happened to be the same day as his birthday so he spent it at the zoo with her!

We took the girls to see Bull Riding

Having more "female" problems. I'm really starting to think more is wrong than they think.

More ultrasounds on those female parts that don't work anyway!

My brother gets promoted to chief in the USCG (congrats bro!)

Kacey finishes up her bowling season

Pre-op for my surgery- Endometrial Ablation

Spend some time laying on the beach recovering :)

More time on the beach

Kayleigh to eye doctor for contacts

I cut 7 inches off my hair!

Meet with Kacey's school nurse to discuss her care

Meet with Kacey's new teachers to discuss her care

BACK TO SCHOOL- One of the scariest days of my life! This was the first time since diagnosis that I let Kacey be away from me at all. Nervous. Scared. Sick. And yes I cried....ALOT!

Kacey goes back for her first Endo check up since diagnosis

Kayleigh gets asked to Homecoming Dance

Kayleigh gets her first boyfriend

Bale sale/Jewelry sale to raise money for the JDRF Walk

I start to volunteer almost full time at Kacey's school

This month 12 years ago I met Frankie

Frankie's sister comes to visit. We haven't seen her in 7 years!

I attend substitute training to be a sub in Kacey's school

Kacey takes her first fieldtrip without me since diagnosis (scary day!)

First Secret Santa exchange in the Diabetes OC (and a great one it was!) I had just as much fun giving as I did receiving. What a special group we have here!

Our family gets into the Wii rollercoaster! I found muscles I didn't know I had (haha!)

Kayleigh celebrates her 3 month anniversary with her boyfriend (yikes...haha I remember when I celebrated "months")

hi frnd! i am medical student from India i saw your blog and its very nice to see - i have a site related to diabetes - www.checkdiabetes.org , please add my site in your blog - please reply me back about your opinion!

Hey...
Just somehow went through this post of yours and Well i figured out the cost you spend on a dentist every year..
Well am a dentist practising in New Delhi and Would love to tell you that in that much of cost in india you can fly to and fro, roam about in india a little and also get your teeth fixed...
So think about it and do come to India as our guests and also refer your family and friends...