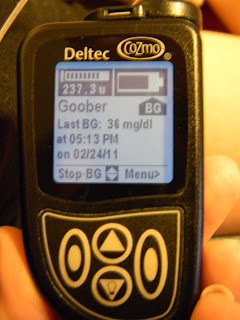 Yes....thats LOW!!! I picked her up from school yesterday around lunchtime because her blood sugar was a 338 and she felt sick at her stomach. After we got home from picking her sister up at school, she layed on the couch to watch TV. We decided that since she wasn't feeling well, I had a bit of a sick stomach stirring and Kayleigh was swamped in missed classwork that we would just skip youth group tonight at church. As much as I hated to, I was worried that I'd end up getting sick while we were there. So we chilled out at home. Kacey ended up falling asleep and I figured that high was just taking its toll on her body...WRONG! I told Kayleigh to go wake her up because she'd been asleep for over an hour and I wanted her to be able to get to bed on time.﻿ She screamed to me in the kitchen, "MOMMMMMMM SHES NOT WAKING UP!!!" So I went running into the living room to find Kacey laying there with her eyes shut.
Me: Kacey, are you ok?
Kacey: no response
Me: KACEY!
Kacey: letting out a moan
Me: (grabbing her kit) Kacey! I think you're low! (testing) ***36*** CRAP!
Me: Kacey! You're REALLY low!
Kayleigh: (gone to grab juice boxes without being asked)
Me: Kacey can you open your mouth?
Kacey: opening her mouth a little.
Whew! OK so she could hear me but she couldn't open her eyes or speak to me. Can you say....SCARED!!!!! I pushed 2 juice boxes immediately . 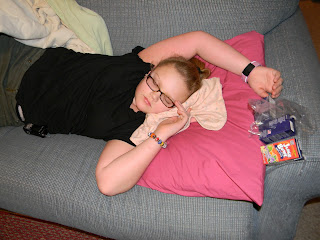 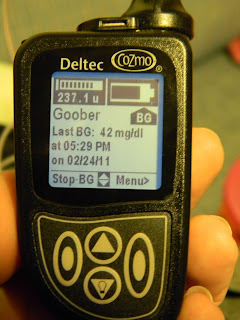 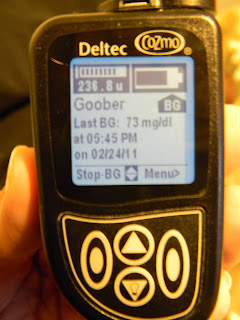 Kayleigh sat by her side like a mother hen and once she came around she just layed there like the life had been sucked right out of her body. 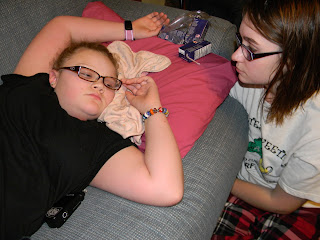 After she came up to the 73, she started talking and actually sat up. She cried, I cried. She was sound asleep so she never felt it coming on. When she sat up, she was SOAKED in sweat. As the tears ran down her face, she said, "Mom, I could hear you but I couldn't open my eyes or talk. I was so scared but I knew you knew I was low." ***insert the throw up feeling here*** I felt like I could vomit at any moment.
Once things settled down, she was able to eat something and she ended up bouncing in the 400's through the night but woke up at a ***103*** this morning. I hope her day goes better than yesterday. I'm not far from school today since the nurse is out and there is a sub nurse in there that has never been there before. It's times like this that I become an overprotective Momma!
Now...once I was finally calm...I sat and thought about things. At the time Kacey dropped low, we should have been driving to youth group at church and that could have happened as I was driving. Yikes!! As I've always said....God places us where we need to be at just the right time and everything happens for a reason. I'm sure God understands WHY we didn't make it to youth group because he made me have that sick stomach so I'd stay home. And you know what? After it was all over and my nerves had settled, my sick stomach was gone. Yep! I'd say it was a blessing that we were home.
So I took that chance to perform an experiment on myself. Since I seem to have a "normal" pancreas. I tested my blood sugar before making myself eat a very high carb meal on purpose. My blood sugar before eating.... ***84*** and then 30 min after the high carb meal ***125*** and one hour after that ***117*** so what did I find out? First of all, I don't have a misbehaving pancreas (thanks be to God!) and is that what a normal pancreas does? I'm not sure? But I tested myself to see if I shot over 200 at any point.
Luv ya's, Mean it!!!

I am about to throw up for you! Seriously, that is what I do when I get nervous! I am so glad she is okay. I totally agree about God working that out for you to be home then. The same thing happened to me the other night. I had to pick up my son from basketball (normally my husband would) so since we were leaving the house I checked Natalie's blood sugar. If we were going to be staying home I would have never done that because it had only been an hour after dinner/shots so she normally would still be high. She was 68! I know that is not terribly low, but it's low for her and she still had 2 hours of insulin to keep working. Thank goodness I had to get my son so I checked.
It's kind of a weird feeling isn't it to test yourself and see how well your pancreas works. I feel guilty when I see just how quick mine goes back to 100 after eating a bunch of junk. I wish I could give her my pancreas!

Ugh, how horribly scary!! I've been that low once and it was while I was driving home from the gym...I thought I was going to lose it! I really don't even know how I parked my car and ran into my house. I think to go from really high to really low is also a really awful feeling. I'm glad she is okay!

Nik~ I know what you mean! I felt terribly guilty when I saw how well mine worked :( but at the same time it once again made me worry that Kayleigh is at the beginning of something not working right since she bounced so high :( Thats scary about Natalie too! When you have all of that insulin on board and you drop low...its hard to figure out the game and play it right. I end up giving Kacey too much and she goes to the moon but I'm so scared she won't stay up so I guess its not good to play ping pong with them but I'd rather her be higher than lower :(

Valerie~ It scares me to think about Kacey getting behind the wheel already. I'm going to have to teach her to check her sugar before she ever starts the car and make sure shes in safe range.

oh Jill I am so glad that mommy gut told you to go check on her. you could have easily said nope Ill let her sleep. Every time Joshua naps for more then 2 hours I wake him I cant help it. I feel bad but I am worried that he will go low. Sending you a big hug and lots of love!

I def know the feeling you had. I get the same feeling every time my husband's sugar goes to low. It is horrible! I forget, does your daughter wear a cgm? My husband got his after having a car accident from low sugar and this thing is awesome! We would never go another day without it!

So sorry this Low came on that way, but glad that it came up OK. Those are incredibly scary ones when you can't feel them, and I know firsthand what it's like to be able to hear that person on the opposite end but not respond. Or, think you're responding but to later be told you were babbling incoherently. Glad it leveled off in the end, and hope the next day was better.

I have had those lows too. The basically stink to high heaven. I tend to fight really bad when I am severely low.

My daughter had her lowest low the other day too -- she was 29 when we were sledding and just said she was tired. After testing in the snow, I grabbed the luke warm hot cocoa from a nearby friend and made her down it, followed by 3 glucose tabs. When we got home was only 45 and then got juice. That afternoon she was hitting 400's too. Tonight had a crazy 450 before dinner for no realy reason, and by the end of dinner was 66. What? Unfortunately it was Kate's 7th birthday today, and she had a very lethargic dinner but did rally for dessert. So glad to read your blog and get ideas and know I'm not alone!